Interfacing is one of the things that can transform your fabric and make the difference between a home-made and a fabulous fashion accessory. 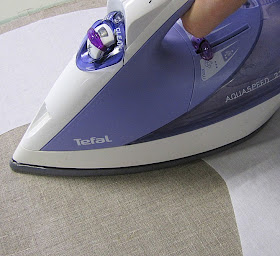 It’s also something that people find intimidating. A few hiccups and people think it’s too hard.
Its not to hard .Once you see the effects of quality interfacing applied properly, you’ll be thinking “interfacing” as soon as you think the word sewing
. 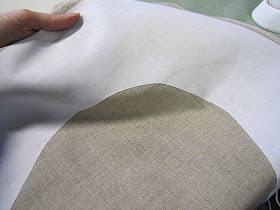 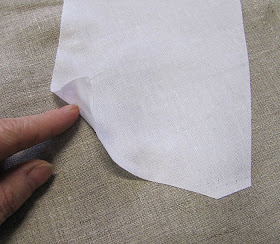 ..
or that it bubbles in areas where it hasn’t stuck to the fabric.
This mostly happens with heavier interfacings, and is usually a result of one of the following –1. The iron was not hot enough.
Most heavier interfacings are designed to be applied with industrial fusing presses so you need to be pretty brutal with the fusing process if you have a domestic iron.
Interfacings such as medium-heavy interfacing need a LINEN setting.
Always test a scrap of interfacing on your fabric first.2. There was not enough pressure on the iron when applying the interfacing
or the iron was not pressed down on the interfacing for long enough.
Unless you have a fusing press, you will have to press down HARD with your iron to fuse heavier woven interfacings (for 10-20 seconds sometimes…. although start with about 5 seconds and check for scorching.
Use a RAJAH CLOTH if necessary) . Press down on the back of the interfacing bit by bit until it’s all fused.
Don’t move the iron over the top as you do when you press clothing.

Pre-washing fabric reduces the likelihood of this issue, although sometimes there is an incompatability between the dyes or fibre in the fabric and the adhesive.

You just have to choose a different interfacing or fabric in that case.  This is rare.
4. Too much steam is used before pressure is put on the interfacing.
Moisture can occasionally stop fabrics and interfacings from fusing together properly.
Dry iron first. Steam if the dry iron fails.

5. The fused fabric was moved while it was still hot.

Leave the fabric to cool (and the adhesive to set) before you wriggle it around or sew it.

The manufacturer’s directions often say to leave it for up to 30 minutes…..
so at least let it cool!

6. The wrinkles were not pressed out of the fabric before the interfacing was applied.
Press the fabric first. 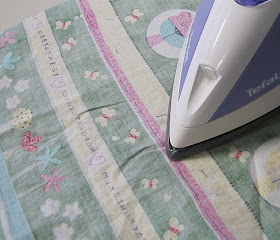 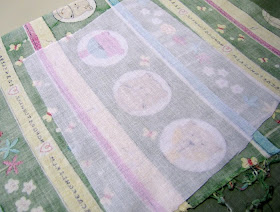 It happens when the iron is too hot. The interfacing shrinks and takes the fabric with it. 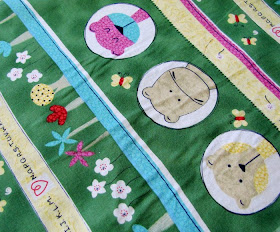 There are several ways to deal with this –
1. Test a scrap of interfacing on a scrap of fabric first
Set your iron accordingly.
Most light interfacings will fuse with a wool-cotton setting.
3. If your interfacing has shrunk and bubbled, you’re best to rip it off
Press the fabric again (using an applique mat to protect your iron or board from adhesive residue) and fuse a new piece of interfacing.
If it shrinks after it’s been sewn (and ripping it off is impossible), you can minimise the damage but never completely cure it.
4. Try a different interfacing.
Category: How To's